The BBC will be giving away mini-computers to 11-year-olds across the country as part of its push to make the UK more digital.

One million Micro Bits – a stripped-down computer similar to a Raspberry Pi – will be given to all pupils starting secondary school in the autumn term.

The BBC is also launching a season of coding-based programmes and activities.

It will include a new drama based on Grand Theft Auto and a documentary on Bletchley Park.

The UK is facing a significant skills shortage, with 1.4 million “digital professionals” estimated to be needed over the next five years.

The BBC is joining a range of organisations including Microsoft, BT, Google, Code Club, TeenTech and Young Rewired State to address the shortfall.

At the launch of the Make it Digital initiative in London, director-general Tony Hall explained why the BBC was getting involved.

“This is exactly what the BBC is all about – bringing the industry together on an unprecedented scale and making a difference to millions,” he said.

“Just as we did with the BBC Micro in the 1980s, we want to inspire the digital visionaries of the future. Only the BBC can bring partners together to attempt something this ambitious, this important to Britain’s future on the world stage.”

It is hoped that the Micro Bit will encourage children to get involved in coding and programming.

The BBC Micro, launched in the 1980s, played a big role in making computing mainstream but it was not without controversy.

The broadcaster’s decision to link up with Acorn Computers angered Sir Clive Sinclair as he prepared to launch a rival machine, the ZX Spectrum. 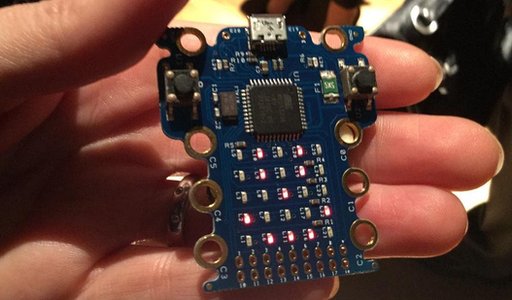 The BBC does not see Micro Bit as a rival to similar computing devices such as Raspberry Pi, Arduino, Galileo and Kano, but rather hopes it will act as a “springboard” to these more complex machines.

The tiny programmable machine is still a prototype and the BBC is working with several partners, including chip-designer Arm, Microsoft and Samsung, to get the end product right.

When it launches in September it will be compatible with three coding languages – Touch Develop, Python and C++.

The device is tiny – fitting easily into the palm of a hand. Children will be able to create text via a series of LED lights and they will also be able to use it to create basic games.

The final version will have a Bluetooth link enabling it to be hooked up to other devices such as a Raspberry Pi.

The Raspberry Pi Foundation is helping to develop learning resources for it and the BBC is being careful not to repeat the mistakes of the BBC Microcomputer launch, which angered rivals such as Sinclair.

BBC Learning’s Gareth Stockdale, who is developing the device, said: “The BBC’s role is to bring focus to the issue, and then we will withdraw from the market.”

After the first million Micro Bits go out to schools, there will be no more.

One day they might become a museum piece like the BBC Micro, which is now housed at the National Museum of Computing at Bletchley.

Algorithmic Trading: Creating your Own Algorithm by @Laithanomics

Great news everybody – the number of students choosing computing GCSEs doubled in 2015. However,

Autism: The educational landscape has changed over the last five years as education institutions explored