While we see out the remaining days of summer term in the smelting ovens, many of us have been making that last push in the name of data and progress to really get the little treasures ready for the next stage in their learning.

Like all schools, we have been reinventing our assessment systems and are in the process of using national curriculum levels for the last term.

As a school we chose to stick with national curriculum levels across the board this year, for several reasons.

Across our Year Four cohort there were several pockets of the writing curriculum that needed a last final push before the summer. These were:

Earlier in the year, during a throw away conversation in the corridor at the end of another frantic day, I had said to my new Year Four colleague that it would be awesome to do a unit based on Star Wars. Ultimately, I had wanted to do this unit on the week of May the fourth (a Star Wars geeks favourite date) however, being a bank holiday week, and directly sandwiched in a short term by trips and residential visits, the Literacy unit didn’t fit. That was until, the final week of term five where the throw away comment was resurrected, we had several disengaged pupils who needed to make very rapid improvement in their writing, end result: we were going to do Star Wars in term 6, and two rather excited over thirty some thing men. To say I was a little excited would be an understatement, I had never used Star Wars in my teaching, so I started hunting…

The Star Wars unit was started after a two week unit of work from ‘Gregory Cool’ by Caroline Binch, a great book with fantastic settings and characters. This book had a good impact on the children’s understanding of characters, their feelings and the description of settings, laying good foundations for further narrative work. We decided that we didn’t want to use large sections of the Star Wars story, instead we wanted to focus only on small scenes. The Star Wars saga is rich in traditional story themes and lends itself brilliantly to several areas of the curriculum, including some very deep discussions on philosophy.
We decided to focus on scenes from the film ‘A New Hope’, in particular the scene where Obi-Wan fights Darth Vader for the first week.

Not all children in the class had seen Star Wars, but there were enough experts in the room to really deepen the description of the scene and put the whole story in context.

We used video compilations from YouTube to explore Darth Vader’s past, and get a deeper understanding of both Anakin’s and Obi-Wan’s turmoil expressed during the scene.

Images and cells taken from the original 1977 comic, which can be read online at the Marvel Comic website, were used along with fan art and language through colour cards to build the children’s descriptions and allow them to experiment with sentence structures.

The learning process for the unit was modelled and shared on the working wall throughout the week. Every opportunity to write was undertaken with an enthusiasm we were astounded by, the children were absolutely absorbed. They were hooked throughout week one and couldn’t wait to write their stories. 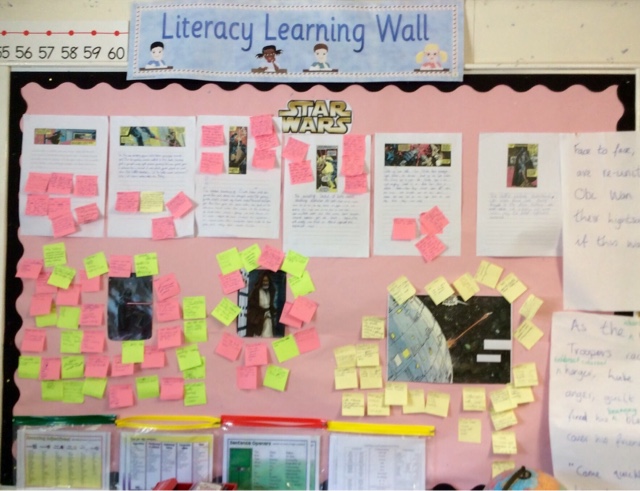 Many different resources were used to support all of the pupils through the unit, to ensure that they could produce the style and level of description expected, as well as meet the punctuation and grammar expectations. Some children found the Language through Colour’ sheets very effective, others preferred to plot their ideas in mind maps and on story mountains. 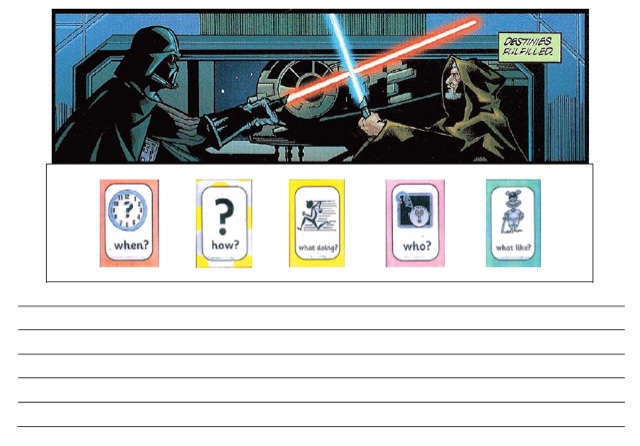 The first two days of the week were spent exploring the character and the back story, we also built in longer SPAG sessions to underpin the required sentence construction and punctuation skills. As the development of the scene progressed, we introduced a shared writing activity where the children explored different sections of the scene. They were given time to talk through their sentences, extend their ideas and peer assess, they then had to switch sections and repeat the process. Within this carousel, the children developed their use of engaging vocabulary and use of adverbial openers.
We used the Book Creator app on the iPad to create a shared writing text with the completed scenes. This meant that all of the children had contributed to a high quality text before the end of the unit and set the market for the expected quality of writing. This is fast becoming my favourite app, it is so easy to use and is very flexible.

The children’s engagement and enthusiasm for writing continued during the second week where the next section of the story was developed. The impact of the topic on the children’s writing levels was impressive, the mean improvement in writing was +2.07 APS per child.

This was the most enjoyable Literacy unit of work that I have taught for several years, it is also the one that has had the most clear and measurable impact on pupil engagement, attainment and progress.

Would I do a unit like this again? Of course.

Will I be able to measure the impact and progress as accurately within a ‘mastery’ assessment model? I’m not sure yet. Watch this space…

Goodbye levels, may the force be with you!

You can read other posts by Adam by clicking here

About UKEdChat Editorial 3135 Articles
The Editorial Account of UKEdChat, managed by editor-in-chief Colin Hill, with support from Martin Burrett from the UKEd Magazine. Pedagogy, Resources, Community.

Mindful of Glitter by @Harveyheals

“The way we talk to our children becomes their inner voice.” – Peggy O’Mara I

In December last year (2016) a well know teacher, author and adviser to the Department for

The Idea of Wellbeing by @chrysalisleader

I’ve been listening to this year’s Reith Lectures by Dr Atul Gawandi.  He’s a very