Over the last six months I have been exploring the use of Google Apps in the primary setting.

I have used the Google Apps with both of my classes in the last six months and have rolled use of the Google accounts our with my partner year 4 class this term.

I have been deliberating the use of Google Apps in the primary school for several years. However, thoughts began to evolve after a visit to Bett 2013. I was researching a alternative to KLZ, the LEA recommended provider for email and calendar management, after being underwhelmed by the service being offered for the price. At Bett there were very few companies that grabbed my attention. Google, however, did. During the summer holiday of 2013, our IT support team,Primary Technologies assisted in the handover to Google Apps for Education. Initially we only activated the mail and calendar functions, but the potential for greater use of cloud resources for collaboration were key to plans for curriculum development within our school. 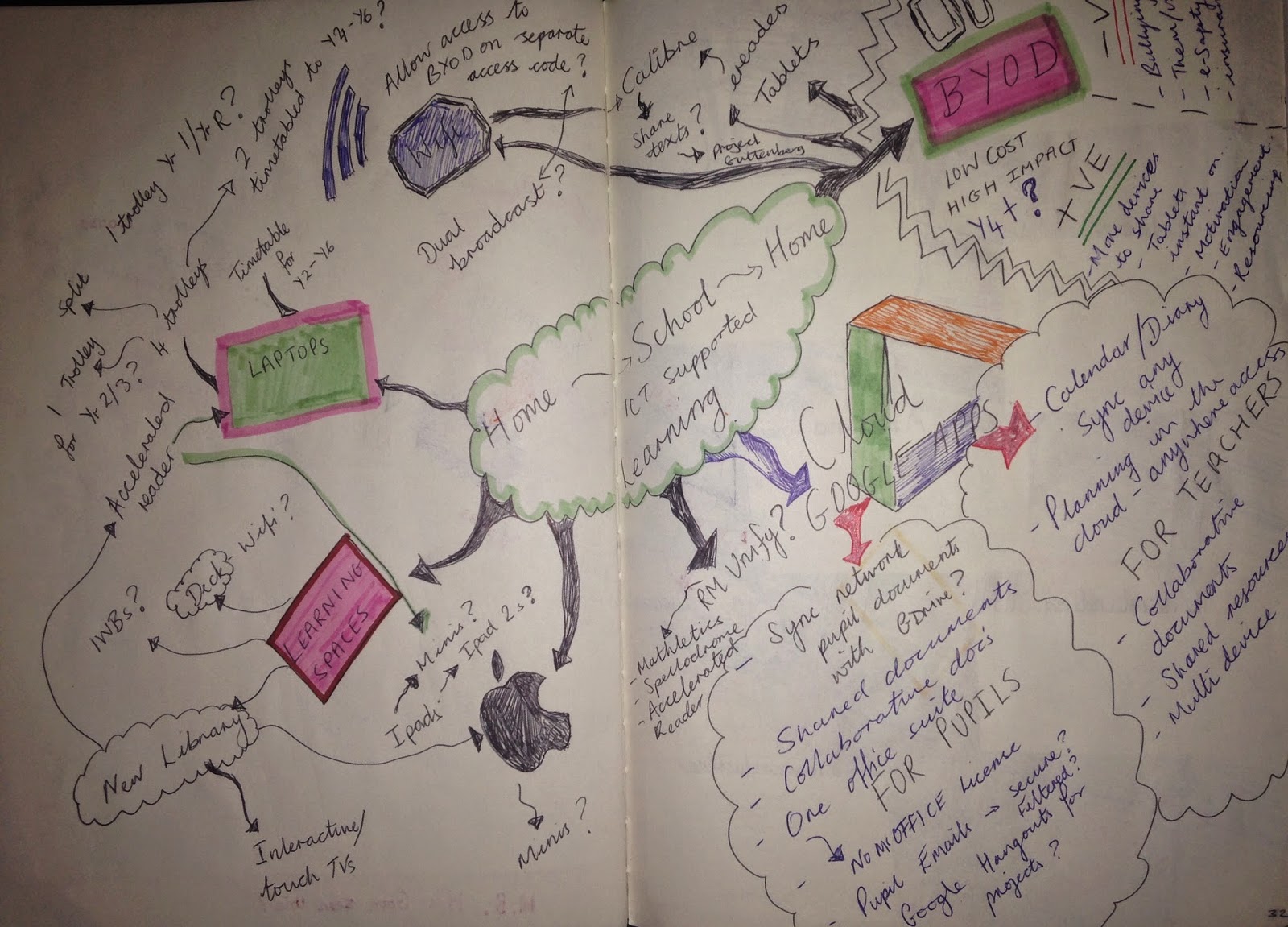 During August 2013 I began to jot several ideas about devices, management systems, content providers and began to formulate a plan. The above photograph is from my thought journal, I’m still adding and reviewing my thoughts on this mindmap – it is very much ongoing.

One of my CPD objectives for 2013-2014 was to investigate the impact of cloud based resources on engagement and attainment in writing. I chose to activate the Google docs, sheets, slides and drive apps from the Google Apps Suite for my class.

There were several hurdles to go through in order to set up and manage the children’s accounts efficiently and safely. I chose to employ the IT support team at Primary Technologies to do this for us. We still get all of our accounts and the apps for free and are saving a lot of money compared to the KLZ or RM easymail subscriptions.

During the year we experimented with collaborative writing and explored the tools on offer. The children were very motivated, and some reluctant writers – not just boys – and several pupil premium children demonstrated improved attitudes towards their writing. One other advantage of the suite of Docs was the availability resources to children at home. The efficiency and ease with which Google Apps syncs with Edmodo (a truly fantastic resource!) creates a very manageable online learning platform with very little or no cost. The children are able to access set tasks, complete them and submit them for review without leaving the cloud; on almost any device.

I was so impressed with the Google Apps for Education and Edmodo system that I am rolling it out across years 4-6 this year. I have already introduced all of our year 4’s to their accounts. Hardware issues have slowed down the setup a little.

Every cloud has a silver lining, the failure of a large bank of laptops has resulted in the purchase of Google Chromebooks and a bank of IPads for KS2 pupils to use. Another set of IPads have also been purchased for KS1 and EYFS. I am very excited to be rolling out devices and tools that have not been used in this scale or in this way in our locality.

I will be sharing our progress so far at the Deal Learning Alliance TeachMeet.
Here is a preview of the presentation – all made using the free suite of apps within Google Apps.

Update
Further details and a synopsis of each presentation from the teachmeet can be read at @chizkent’s blog.
https://chizkent.blogspot.co.uk/2015/02/irresistible-writing-teach-meet.html

You can read other posts by Adam by clicking here, and follow him on Twitter…
Tweets by @primaryreflect

How can we support staff?

Looking for Minecraft in the classroom resources? Just after writing this post, I came across

Anyone can pull a great lesson out of the bag, especially for observation and especially