I have not only been looking at how I teach new topics but also those which I feel confident in delivering.

Coincidentally last week, I had the privilege of visiting another school which gave me the opportunity to observe an outstanding practitioner in action. For me, what made the hour so memorable was the commitment of everyone, teacher and students, as well as the other adults in the room. This commitment came in the form of expectations of excellence in behaviour, presentation, effort and execution of mathematics. Everyone was aware of the expectations placed upon them and were determined to meet them. The students showed perseverance when applying their mathematical solving skills to some really challenging problems.

This is a re-blog post originally posted by Kelly Leonard and published with kind permission.

They were incredibly respectful in their behaviour towards everyone else in the class. This group was a set 6 of 6, students who entered the school on level 4cs or below, a high proportion of them would be described as disadvantaged. These were the students that popular opinion would suggest that we, as teachers have low expectations of and the ones whom schools sometimes fail. Yet, in this classroom they were all on course to achieve at least three levels of progress (many four), they were all expected to succeed. The prospect of failure was nowhere in sight and was certainly not in the vocabulary of either the students or the teacher – this was an example of growth mindset in practice.

Looking at this lesson selfishly for my own personal gain, I learned three approaches which I could quickly magpie and add to my toolkit. I’m sure most maths teachers will be familiar with them so apologies if I’m teaching grandma to suck eggs but I think it’s only fair to share good practice:

Apparently, the teacher picked this technique up from her NQT mentor 12 years ago and decided to make it her own. The beauty of it is that it addresses the problem of the signs before the terms that students always struggle with. Just by circling the term and its sign makes a huge difference to student understanding. My notes on this are below:

Again another method she developed by sharing, this time at a maths conference. Another approach which is best represented through my notes:

Being able to visualise how the ratios are shared enabled students to more confidently manipulate the parts. The students also showed a real rigor when applying division, multiplication and checking, skills which only come from deliberate practise and clarity of explanation.

This is something which, when watching it, I realised was such a simple and clear approach. Rather than explicitly trying to force students to remember the interior rule to work out angles at each vertice in a regular polygon (which they find incredibly difficult to recall), students were encouraged to use e = 360/nand then combine it with e + i = 180 to solve complex problems such as this: 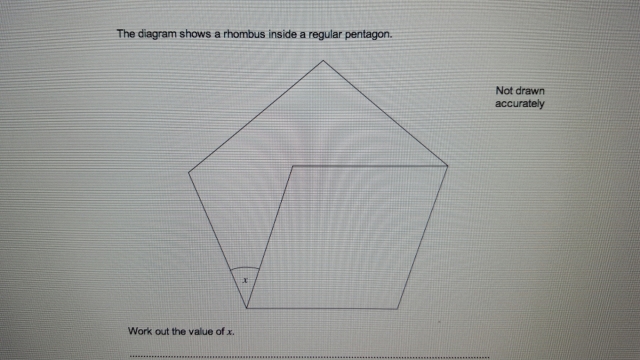 Arguably, students need to know and recall key facts about properties of shapes (which they had been explicitly taught) and they were aware of the formula for interior angles, which they could apply when necessary. However, they were confident in their own abilities to choose the most efficient method of problem solving for each particular question. They structured and executed their responses concisely thus enabling them to attempt more demanding questions both elegantly and successfully.

Aside from taking away subject specific teaching points, there were also little gems in the practice that could be transfered into any classroom. Firstly was the routine, it was evident that these students had a set of procedures which they followed both throughout the lesson and in their working. This served them well in both settling down to work and approaching open ended problems. Another tool the students were given was annotation: using diagrams and their own observations to focus their thoughts. This was effective when structuring more responses to complex questions since they had provided their own scaffolding.

Lastly and quite brilliantly, using an absent student’s book and the visualiser, the teacher modelled how questions should be approached. This meant that not only was there a clarity of explanation shared in a setting that the group could easily relate to (since the examples were in a book and not on the board) but also the absent student had a starting point from which to develop their notes on when they returned. Quite simply brilliant.

I consider myself blessed to have had an afternoon with such an excellent practitioner. She was modest in her feedback, giving credit to others for the ideas mentioned above and to the students and staff for the great lesson I observed. I took away more ideas in a one hour lesson observation than I probably would have done in a whole day’s INSET. It’s understandable that some mathematicians among you may be questioning my ability as a teacher in the wake of revelations which may be nothing new to you.

The truth is, I am and always have been a practitioner whose students are in receipt of a good deal where their mathematical education is concerned. I have never been arrogant enough to think that I know everything or have nothing left to learn as far as pedagogy is concerned. A much more useful observation would be that if an experienced teacher of fifteen years is continually learning new approaches then perhaps there is something you can share with or learn from others.

Don’t be afraid to look outside your setting to do so. If you’re a classroom teacher, ask your SLT to use CPD money for cover so that you can spend the day observing colleagues or visiting another school, if you’re a Head of Department, talk to other HODs outside of your local network and if you’re SLT then encourage all of the above! Sharing practice is the most valuable CPD you can invest in. After all, we never stop learning and it’s our job as teachers to develop that continual reflection in one another.

Image source: By stefg on Flickr under (CC BY 2.0)

Session 3 – How can we use collaborative tools to enhance learning?

–Topic of Discussion How can we use collaborative tools to enhance learning? (full details more

Make Us Wait by @funASDteacher