Samuel Taylor Coleridge poet, literary critic, philosopher and friend to William Wordsworth, coined the phrase ‘willing suspension of disbelief’; namely the ability to know something is not real, but playfully go along with the deceit.  This is the key to Oracy Week at Warden House.

Warden House hold an Oracy Week in September each year.  The key principle of the week is to engage pupils in the spoken word and to get them talking about story. Previous Oracy Weeks have included an alien invasion, a pirate siege and a journey to Middle Earth.  This year one of our key objectives from our school plan is a school-wide focus on extending our children’s reading comprehension skills; we therefore decided to use the 400th anniversary of William Shakespeare’s death as the focal point to our special week.

We engaged a local theatre company Cantastori to provide a range of artists who could bring our week alive and embrace Coleridge’s ‘willing suspension of disbelief’ as Mr Shakespeare was to travel through time to visit our school.

This is a re-blog post originally posted by Graham Chisnell and published with kind permission.

Submit your blog post for reblogging on UKEdChat.com by clicking here.

The stage was set.  It was a normal Monday morning in September, the children entered the school hall ready for the morning assembly.  The music faded and the headteacher introduced the assembly and then…..

Behind the headteacher, from the depths of the school kitchen, pots and pans went flying (Bev, our school cook nearly needed CPR!) and William Shakespeare appeared from behind the curtain. He had arrived mysteriously from the past while formulating an idea for a most magical play about a dream in the heat of a midsummer night.  Shakespeare told the children he needed inspiration for this most magical play as the play was to be performed this very week on Friday to no other than Queen Elizabeth.  The children were engaged.  William Shakespeare then spotted one of the teachers and took a shine to her, offering her a rose, to the children’s delight and the teacher’s embarrassment. Then, as swiftly as he arrived, William Shakespeare was gone; leaving the children with the challenge to create the play.

Dance of the Fairies

The Year 1 class teachers then created a dance with woodland creatures and fairies coming alive in the depths of the forest.  Once the dances were polished, a camera operator and actor arrived to film the dances.  The film was then prepared to be shown during the final play on Friday. Children used the text Freddie and the Fairies by Julia Donaldson and illustrated by Karen George as a stimulus to the characterisation of the fairies and woodland folk in the dance.

We wanted to explore a range of arts genres through the week and our Year 3&4 pupils were introduced to Elizabethan Dance.  Pupils, who were more used to dancing the Gangnam Style or YMCA at the school disco, were taught the rules, poise and structure of Elizabethan Dancing using the pavane, a slow processional dance common during the 16th century. The dance is a sedate and dignified couple dance. Children performed their dance at the end of the day to the school as a rehearsal prior to the performance on Friday as part of the final play. 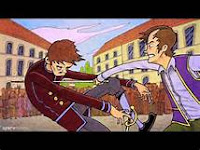 Children in Year 6 were led through the key skills of stage combat.  The actor showed children how to remain safe (ensuring the terms of engagement were clear this this was only for the stage and must not be used elsewhere in the school), while giving the impression of being locked in a combat with another character.  The combat focussed on two scenarios.  The first was a love-struck argument between Hermia and Helena.  The actor showed children how to hold one another to make it appear that one character was being dragged by their ear or their hair.  The second battle was between Lysander and Demetrius who acted out a ‘fight scene’ with cleverly timed swipes and punches.  The children thoroughly enjoyed learning these skills and the audience, during the final performance, were in awe as they saw the scenes brought to life by this technique.

The stage was then set for our Year 5 pupils to learn and rehearse the body of the play.  The young actors were given expert instruction from three actors from Cantastori.  Pupils learnt about voice projection, stage presence and were taught to understand the use of mime in acting.  Some pupils wore masks for the performance while others read and performed scripted pieces. The play allowed pupils from across the school to play their part. One scene saw the woodland and fairy dances from Year 1 projected on the screen while the stage combat scene thrilled the audience with may gasps from both pupils and teachers alike.

The week was great fun and engaged our pupils in a range of arts disciplines.  The key question we were left with was “So what was the lasting impact of this project?”

It is early days, but from our pupil’s perspective.  The activities drew out the confidence of our children, with some of our most shy pupils projecting confidence in their activities.  The richness of Shakespearian language encouraged our children to be playful with their words, impacting on their ability to use adventurous and expressive language in their writing. The stage combat allowed our children to develop the joy of entertainment and those involved thrived on the audience’s reactions. While the play itself cemented the idea that both composition and performance was rooted in understanding the importance of the audience.  The engagement in the arts making a tangible impact on the quality of writing and reading comprehension for all our children.

The week also taught our children to suspend their disbelief, and thoroughly immerse themselves in another world.  A quality that Ken Robinson would call ‘Finding their Element’ , we certainly saw children and staff lose themselves in the arts during Oracy Week and for some pupils, their experience allowed them to meet a new passion that they were keen to explore further, be it acting, mime, art, dance or a love for a 400 year old playwright.

Contrary to conventional belief, study shows children can learn how to solve a problem on