With Earth Day just passing, the question in the post is relevant to bring up.  Especially, when the environment is under attack from the consumers of the world (us).  I was perusing Twitter last week, when I stumbled upon the following tweet from the Los Angeles Time newspaper’s twitter feed shown below: 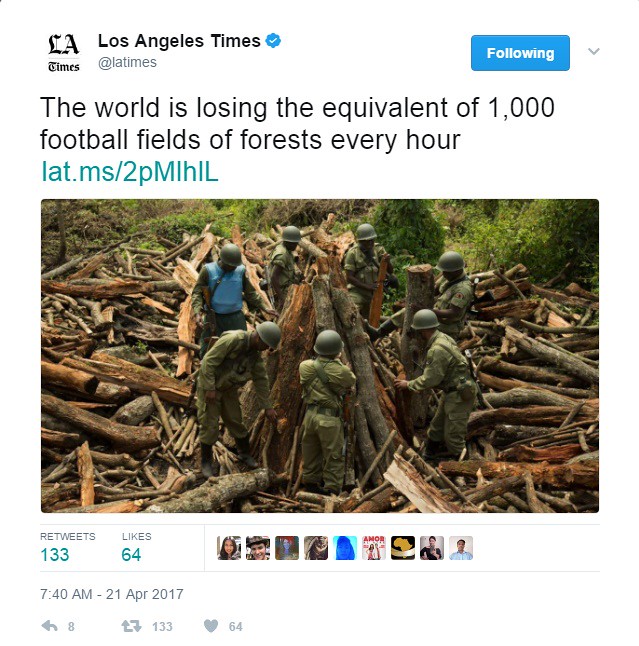 The rate of deforestation of 1,000 football fields an hour caught my eye — which led me to read the statistic in context.  In the article from the ‘Los Angeles Times‘ titled “Status of forests is ‘dire’ as world marks 2017 Earth Day” I found the rate (as mentioned above in the tweet) in the following context:

Since 1990 the world has lost the equivalent of 1,000 football fields of forests every hour, according to World Bank development indicators from last year. That’s 1.3 million square kilometres of forest, an area larger than South Africa, according to the international financial institution.

First of all, I really had trouble envisioning the area of 1,000 football fields at a rate of every hour for the last 26 years.  The remainder of the article is insightful into the damage that consumerism had wreaked upon the world over time.  Rarely do we get a chance to consider the large destruction of forests over a large period of time.

Over the last week, the statistic has been brewing in my mind.  I had the urge to perform some dimensional analysis to confirm the reported statistic — which is stated in question form shown below:

How many square kilometres of trees would be deforested at a rate of 1,000 football fields an hour?

In the paragraphs below, I show how to answer the question by using dimensional analysis.  Enjoy!

How Large Is An American Football Field?

In order to tackle the question at hand (stated above), the first value that must be obtained is the dimension of a conventional American Football field.  To start,  I typed into a search engine the following statement: How many square meters are in a football field?  Which yielded the following answer shown below:

From this determination, the rate of deforestation can now be written in a different form — in units of ‘square meters’ instead of units of ‘1,000 football fields per hour:

There are two more major steps to get to a final answer of total number of square kilometers of trees deforested in the last 26 years.  The above rate was for one hour of cutting trees down.  In the excerpt taken from the article, the statistic was for 26 years worth of tree cutting at a rate of 10,000 football fields per hour.  Taking the rate above and converting the denominator from ‘units’ of ‘hours’ to units of ‘years’ will get us to the multiplication factor.

In the conversion below, I show that the rate is converted to square meters per year — which is then multiplied by 26 years to arrive at a total number of ‘square meters’ of trees removed from the Earth:

In the post above, the statistic of 1.3 million square kilometres worth of trees was calculated from the time interval given along with the rate of 10,000 football fields per hour.  Now, at this moment you might be thinking the following question:

I will probably go back and read the report to find out the assumption (the size of the report’s authors assumed football field size) used by the authors.  Regardless, now, you are equipped to answer equivalent questions using dimensional analysis.

Until next time, have a great day.

This post originally appeared on my blog site: Mike Think’s

You’re an idealist, and I pity you as I would the village idiot. Stanley Kubrick

Anyone can pull a great lesson out of the bag, especially for observation and especially