Random pictures: This idea appears in several different forms in our Black Book. Subjects ranging from English to D.T use this tactic in varying ways and it is always assured to get high engagement conversation going in the classroom.

This is a re-blog post by Chloe Smith representing MeophamSchool and published with kind permission.

The premise is simple. Provide students with a seemingly ‘random’ image and ask them to make links with the image and whatever topic you have been studying. Instantly it is easy to see how this idea can be transferred between subjects. Whether you’re teaching young or old, low or high ability, they will all have something to say about the images you present.

This example comes from an A Level English lesson. To encourage students to draw comparisons between The Great Gatsby and Richard III, they had to make links to both texts from each of the images. The green light might be obvious for Gatsby, but the link for Richard would need to be far more subtle. For example, green has connotations of jealousy or envy or even greed. Richard is hungry for power, greedy for it perhaps. Similarly, the characters of The Great Gatsby are greedy for that which they cannot have.  Encouraging students to talk around images can create a productive discussion with links that you may not have even considered yourself. 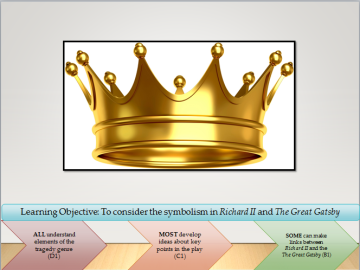 From the same lesson, the obvious link is now to Richard III and the more subtle link needs to be made to The Great Gatsby. For any subject where comparison is required, this concept can be easily adapted. Comparing the reigns of rulers? Comparing the climates and landscapes of countries? Comparing opinions and views of political parties? Comparing results of natural disasters? Images are worth, after all, a thousand words. With the most complex of skills such as comparison, no doubt teachers would be happy for ten words!

For additional scaffolding, consider cutting the images in to pieces for the students to match up. This could be a way to control the groups you end up with. By handing out the pieces yourself, you have picked the groups yet to your students it still looks ‘random’. This could be a method of differentiation perhaps, allowing the lower ability students in your class to have the more accessible image.

This idea could also be applied to more practical subjects. It has been used in Design Technology here at Meopham. Students are provided with a seemingly random object. There is no context on the size of the object, the purpose of the object or the material of the object. Instead, students must discuss and decide for themselves. The aim of the image in this task is not to encourage comparison but rather just explorative thought. Another strategy from our Black Book, ‘Before Before, After After’ will be featured on this blog soon showing yet more ways that an apparently context free image can be used to promote high level discussion in the classroom.

Deduction skills could also be pulled in to play using a random photo. Perhaps present students with a scene of a natural disaster and ask them, what happened here? What is the physical impact on the area? The economic? The social? Once we open up discussion in our classrooms and make it for the purpose of discovery rather than simply to answer a question in the familiar feedback format, our students can surprise us not only with their perceptiveness but also their originality. Often talking around an idea can bring us to the right idea eventually.

The idea of this strategy is simply to rethink how we use an image. We often use them to cement understanding, to show the answer, to structure a piece of work. More often than not, we do an awful lot more talking than the image does. Instead, step back and let the students talk about it. Yes, it might take them a while to get there and yes, you may need to prompt them. However, the ideas that come out in the mean time might well surprise both you and them.

Are your students tough enough? by @Guruteaching

Every year the same questions in education appear again and again. One question I’ve been wrestling

The Abolition of Homework? by @BST_Principal

Meditation sessions, long walks between classes and no homework? It sounds like most children’s dream

Session 148: Share ideas on how you best reflect on your own teaching practice.