Not everyone is born to be a naturally gifted student.  Each of us have our own rate of learning (i.e. rate of retention).  Therefore, each of us as students should learn a simple mathematical statement of “intelligence” which we can carry with us throughout life and access at any point in a struggle when conquering a new challenge in life.  Each of us are unique.

The spring time ends with commencement ceremonies at various universities around the world.  During this time of celebration, there is a realisation in every graduate’s mind: fear of the unknown looking into the future.  Questions might arise that parallel the following:

1) Am I really ready to go out into the professional world?

2) Did I really learn everything I need to in college which will bring me success?

3) Should I stay and earn a second degree to ensure my success later in life?

These are natural questions or thoughts by graduating students.   Additionally, these are natural thoughts of every students at each point in their academic journey.  Rest assured students (and graduates), your learning has just begun.  I am drawn to the recent remarks of the famous actor Robert De Niro’s graduation commencement speech at New York University:

This thought is extremely important for each of us.  Life is not about a “grade.”  Life is about the struggle of each journey.  The degree of difficulty in each journey is defined by a variety of parameters.  Typically, the most feared parameter is that which is defined by ourselves — i.e. our own self confidence.  Success is difficult to attain when confronted with challenges.

Life Is Full Of Challenges

Challenges come in a variety of flavours.  99% of the flavours (or types) of challenges are out of our own control.  Meaning that the best we can do is work hard and keep moving forward.


How does a person utilise the 1% (i.e. confidence) to overcome 99% of the challenges?

As I mentioned in the introduction, there is a simple mathematical relationship that is available to each of us — which we can carry and access at any moment in the future when feeling challenged.  The equation is not complex in any respect.  There are two parameters (words) in the equation which are related by the law of proportionality.  Two words, an equal symbol, and a division line.  Simple right?

Here is the relation between “intelligence” and “ignorance” which I came up with many years ago shown below:

The interpretation of the above equation is quite straightforward (and simple): As I reduce the ignorance on any given subject, I become more intelligent on the subject matter.  Simple right?

The formal interpretation can be found on the “Wikipedia” page for “proportionality” as shown below:

I have shared this equation with people over the years.  Some have responded positively toward me while others have responded negatively.  The negative comments are mostly centered around the response: Ignorant? What? I am ignorant?  This reaction is perceived as normal when first confronted with the parameters of the above equation.  Although, if the following two words — “ignorance definition” — are typed into a search engine such as ‘Google’ the following definition appears shown below: 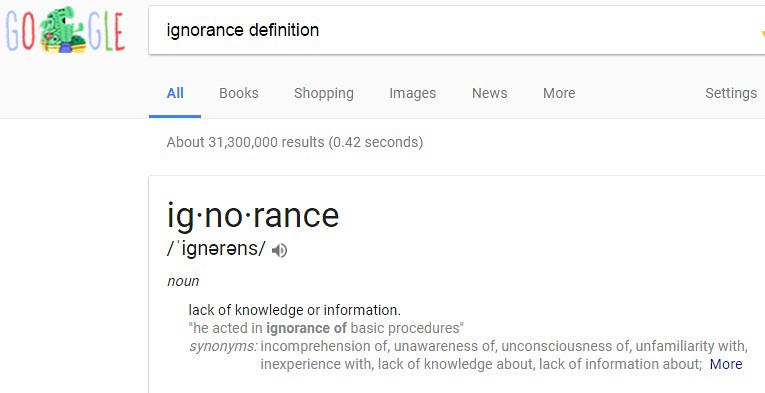 The result indicates that the definition of “ignorance” is: “lack of knowledge or information”.  Instead of taking offense, just realize that if a person lacks knowledge on a given subject — then technically, they are “ignorant” on the subject matter.  This might sound harsh at first.   Therefore, lets take a step back into and briefly explore how I cam up with the equation for intelligence above.

Intelligence Is Greater Than Knowledge Learned In School

When I entered college, I learned that in the university environment was filled with extremely intelligent people.  At first the range was limited to the students (graduate and undergraduate) and faculty.  Later that range would expand to include all members of the university setting (students, faculty, and staff) for the reasons below.

During my undergraduate education I dropped out due to unexpected circumstances.  This break would last for four and half years.  I decided to join to United States Air Force and work on fighter jets — the F-16 Fighting Falcon.  As I discuss in a previous blog, my time spent in the military was not without a scientific influence.  Chemistry influenced a major portion of my work while repairing F-16 Nickel-Cadmium batteries.

The reason why I mention my service in the military is due to the soldiers with whom I got to associate (work) with.  When I first joined the military, I was labeled a “smart” person because I entered with a few years of college behind me.  I would often get asked the question: Why did you not just stay in school and complete a B.S. in Chemistry and then join the military as an officer?

Had I stayed in school, I might not ever entered the military at all.  Furthermore, I take the position that I learned about the broader range of intelligence by serving with my fellow enlisted soldiers.  I was able to see a world that is not accessible to the ‘officers’ of the military.  The enlisted soldiers of the military make up the cross section of the United States with varying degrees of education.  Some like me have a couple of years, while others join the military right out of high school.

The overarching lesson that I ascertained from the military and working with fellow soldiers on the electrical and environmental systems of the F-16 was that intelligence has little to do with formal education.  Not to say that formal education does not make a person more intelligent.  During my time working toward solutions of various components on the fighter jets, I learned that the military has some of the most creative and ingenious people on earth.

At times, I would find myself thinking toward a solution in a linear fashion and no sooner would a fellow soldier with no college experience come up with a solution from thinking in a “complete” or “conceptual” framework to the problem at hand.  I was taught very quickly to look at the whole system as a “complete system” and troubleshoot from that starting point.  This type of thinking can go against the typical model of thinking (linear) that is taught in military training school.  Although, this type of thinking can help a soldier arrive at a solution much sooner in certain circumstances.

With this in mind, I had to come up with an expression to fit the intelligence that emerged from these soldiers with little to none educational experience.  The only way that I could quantify the intelligence was to equate that intelligence with basic information.  Which is to say, as a person becomes more “informed” – i.e. gains knowledge — about a system, they become more “intelligent.”

Out of this analysis which took a two years out of a four year stint in the U.S. military, the equation shown above for intelligence arrived.  I was really tired of being called “intelligent” or “smart” just because I had a few years of college behind me.  The same soldiers would call label me with these titles and then find a solution to a hard problem on a fighter jet in no time at all — i.e. they were intelligent and fast thinking toward a solution.

What I came home with was an operational definition of “intelligence” which fits any person on this earth.  Each of us have varying degrees of intelligence due to the fact that each of us have varying degrees of knowledge on a given subject.  The satisfying realisation of the equation above is that each of can be “intelligent” in any given subject — given that we immerse ourselves in the process of becoming “less ignorant” on that subject.

Graduates, as you go out into the world and become useful to the professional workforce remember that the process of becoming more intelligent involves your ability to become less ignorant on a given subject or task.  Your effort will define your intelligence.  Go out and learn something to increase your intelligence.

–Session Summary: Being given the role of subject leadership within a school can either inspire

Why ‘mixed ability’ classrooms are the way forward by @BloggingAP